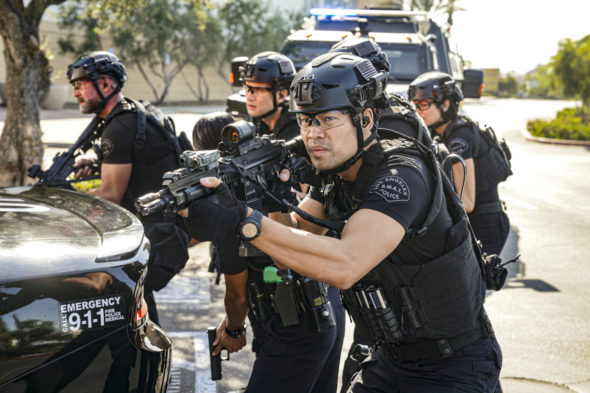 Could the move to Friday nights help keep this show going? Has the SWAT TV show been cancelled or renewed for a sixth season on CBS? The television vulture is watching all the latest cancellation and renewal news, so this page is the place to track the status of SWAT, season six. Bookmark it, or subscribe for the latest updates. Remember, the television vulture is watching your shows. Are you?

The fifth season of SWAT averaged a 0.45 rating in the 18-49 demographic and 4.28 million viewers. Compared to season four, that’s up by 8% in the demo and up by 35% in viewership in the live+same day ratings (including DVR playback through 3:00 AM). While these numbers don’t include further delayed or streaming viewing, they are a very good indicator of how a show is performing, especially when compared to others on the same channel. There can be other economic factors involved in a show’s fate, but typically the higher-rated series are renewed and the lower-rated ones are cancelled. Find out how SWAT stacks up against other CBS TV shows.

SWAT has been renewed for a sixth season which will debut on October 7, 2022. Stay tuned for further updates.

Will CBS cancel or renew SWAT for season six? For the 2020-21 broadcast season, this show was the lowest-rated scripted series on the network to be renewed. Rather than cancel it, the CBS programmers moved it to Friday nights where it did very well. They’ve now moved it to Sundays in a later timeslot where it’s not doing quite as well. I still think the series will be renewed. The drama is co-produced by CBS TV Studios so that doesn’t hurt its chances. I’ll update this page with breaking developments. Subscribe for free alerts on SWAT cancellation or renewal news.

What do you think? Are you glad that the SWAT TV show has been renewed for a sixth season? How would you feel if CBS had cancelled this TV series, instead?

Share
Facebook
Twitter
Pinterest
WhatsApp
Previous articleWimbledon 2022 LIVE: Indians who have won Wimbledon title: Check OUT
Next articleCisco plans to wind down its business in Russia and Belarus, after suspending its Russian operations in March, and offered to relocate its few hundred employees (Reuters)