Petracca good, Oliver great, but Jack Viney the real hero as the Dees get back on track 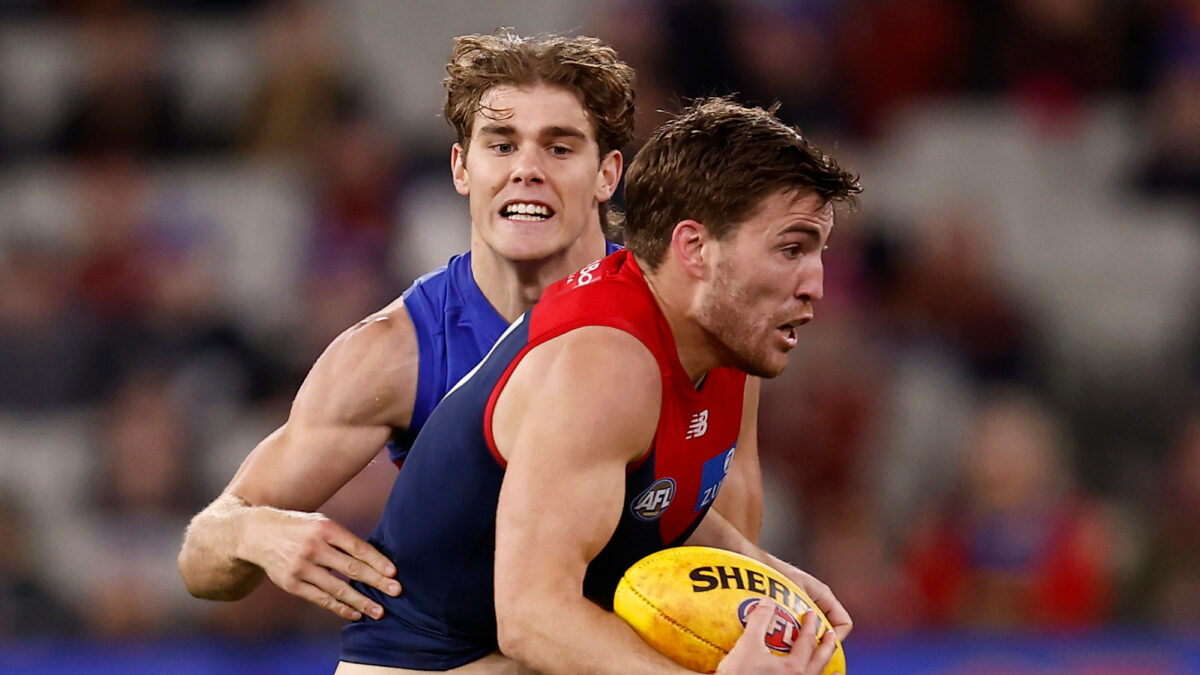 Playing third wheel to one of the best midfield one-two punches in recent memory can’t be an easy job.

While Clayton Oliver and Christian Petracca rack up Brownlow votes, win Norm Smith Medals and generally receive the lion’s share of the acclaim for Melbourne’s finest performances, Jack Viney has been content to get his hands dirty, tackle ferociously, create space for his star teammates and generally do all the plough horse work in the best midfield in the game.

The man seen as a captain in waiting basically since he turned 16 gave up that role to Max Gawn, and watched on as he led the Dees to that fairytale flag last year. The Viney name is royalty at Melbourne; team player though he is, and premiership player though he is, it surely burned Jack at least a little, deep down, that he wasn’t the one hoisting the cup on that magical night in Perth.

You only need to look at his performance on Thursday night for proof. Skippering the Dees with Gawn on the sidelines with a busted ankle, with his team knocked off their perch by three straight losses, against the opponent that usurped them atop the ladder in Brisbane, this was a night made for Viney.

If you didn’t watch the game, or were only keeping an eye on the stats, it does seem like Oliver and Petracca did their share of the heavy lifting in a 64-point thrashing. The former recovered from a slow start to look clinical in the guts, winning clearances like they were on sale and wresting the ball from in close more than anyone else.

Petracca’s explosiveness looked back after a quite patch coinciding with the Dees’ drop off; once again finding space on the flanks with sheer pace, the extra dimension his brutal mix of power and speed cut the Lions apart all night.

Viney doesn’t do all that. Instead, he goes in at the footy harder than anyone else in the game, harder than anyone of his stature really has any right to. When he can’t win it, he tackles like, well, a demon. Well done if you beat him to the footy – but good luck getting anywhere with it.

Others had more stats, but not a single man afield had more impact. 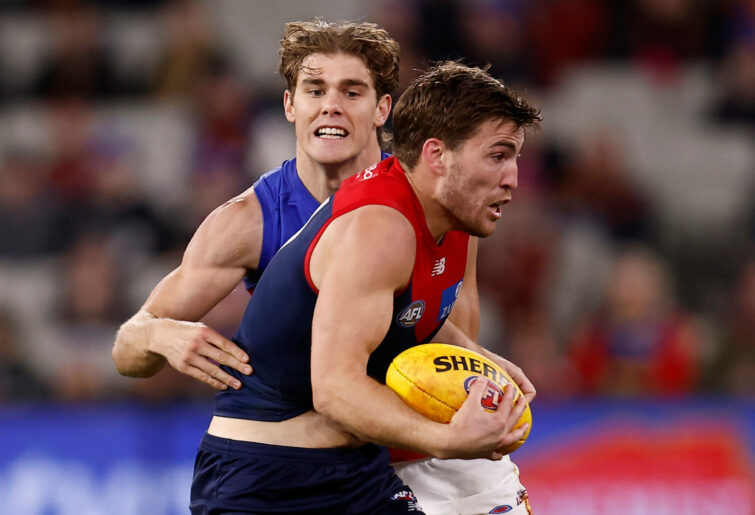 We knew all that about Viney, to be sure: but with Oliver and Petracca stealing the spotlight, it’s easy to overlook how elite his hands are. If Tom Liberatore has the fastest hands in the game, then the Demons number seven isn’t far behind.

Don’t sleep on his kicking, either: a beautiful pass underneath a spluttering Lion onto the chest of Petracca, amid a sea of maroon and blue, showed a left foot worthy of Daniel Rich.

His fend-off isn’t as flamboyant as Dustin Martin’s, but boy was it effective tonight. No matter which Lion went at him, if Viney didn’t have time to offload before they arrived, it wasn’t a problem. A quick thrust of the arm for a split-second of space – more than time enough to get the Dees going.

And go they did.

Much has been made of the Demons’ pressure falling off a cliff this year, but their clearance struggles have been a more direct cause for their slide. In their defeats to Fremantle, Sydney and the Magpies, they’ve ranked third-last in the competition for clearance differential.

Tonight, after being tied at quarter time, they’d win the stat 46 to 35. Contested possessions, too, were a rout – 170 to 133, with Viney contributing 19 and Oliver 21. And that without Gawn palming it down their throats – Luke Jackson, while exceptional around the ground and brutal in close, was comfortably shaded for taps by Oscar McInerney. Not that it mattered.

Tackling, too, was immense, particularly in the third quarter, when the game was ripped to shreds with 6.6 to a single major. After just eight tackles to quarter time, the Dees rocketed to 26 by half time, and finished on 67. Not significantly larger than their efforts in their three defeats, but the pressure meter reading of 216 in the second term, courtesy of Fox Footy, most assuredly was.

It wasn’t just the clearances, either; it was the speed of ball movement going inside 50 that cut the Lions to pieces. Oliver’s kicking still isn’t quite at his absolute best – it wasn’t as if he was lacing kicks inside 50 to leading forwards.

But the Dees seemed more prepared to walk it inside 50 – running forward in waves from stoppages, creating the overlap, and enabling the likes of James Harmes, Tom Sparrow and even Jackson, midfielders by trade, to hit the scoreboard.

When the ball went long, too, there were Demons smalls in numbers – Brandon Starcevich, Noah Answerth and debutant James Tunstill will be having sleepless nights over the speed, guile and finishing class from Kysaiah Pickett, Charlie Spargo, Toby Bedford and a host of others.

From struggling to pass 60 for a month, the Dees reached triple figures without breaking a sweat – and with 37 scoring shots, the damage could have been even greater.

Viney wasn’t the only unsung hero. Harmes won’t get a Brownlow vote for his tagging job on Lachie Neale, but after the Lions star threatened to rip the game apart with four clearances inside the first ten minutes, two leading directly to Brisbane goals, he was almost a non-factor.

Harmes’ presence on defensive side of the centre bounces also allowed freedom for Viney, Oliver and Petracca to surge forward in waves, as akin to the 2021 grand final as they’ve been at any point this season.

It basically meant Steven May, rusty after basically a month off, wasn’t even required to be at his best. Early on, when the Lions were on top, the number 1 looked vulnerable one out against Joe Daniher, with the Lion outpointing him on multiple occasions and looking to work him up the ground and away from the danger area.

When the Lions did foray forward, it was instead Jake Lever, with four intercept marks by half time, and Angus Brayshaw, again roaming from defence to the wing and everywhere in between, that stood in their way. If there was a more influential player than Viney on the ground, it could only have been Lever, who for the first time in an injury-interrupted year, looked at his 2021 best.

Michael Hibberd, too, showed he’s far from a spent force by nullifying Charlie Cameron – they sure could have used him on Tom Papley or Michael Frederick.

Viney had been one of the few Demons that could hold his head high in their three straight losses; he laid a staggering 12 tackles against Collingwood on Queen’s Birthday, and 28, 32 and 33 touches in those defeats respectively. Suddenly, though, with Petracca back to his best and Oliver more impactful than in some time, those little, incremental wins by Viney at the coalface began to have real impact.

Don’t be fooled by the talk of the Dees’ culture crumbling around Steven May’s mouth, either. This is a group that clearly has a lot of love for each other – clusters of teammates going to offer congratulations after a spoil, a throng converging around Viney after a particularly tough collision in the final term, the list of good signs went on.

The Lions will probably be fine – they’re a different beast at home, and have enough wins in the bank to be confident of a top-four finish, if not top two. But this can’t be anything other than a serious reality check, and a reaffirmation as to the official best team in town.

Rome wasn’t built in a day, but neither did it fall in a fortnight. If you thought the Demons’ time at the top was over already, it’s time to think again.