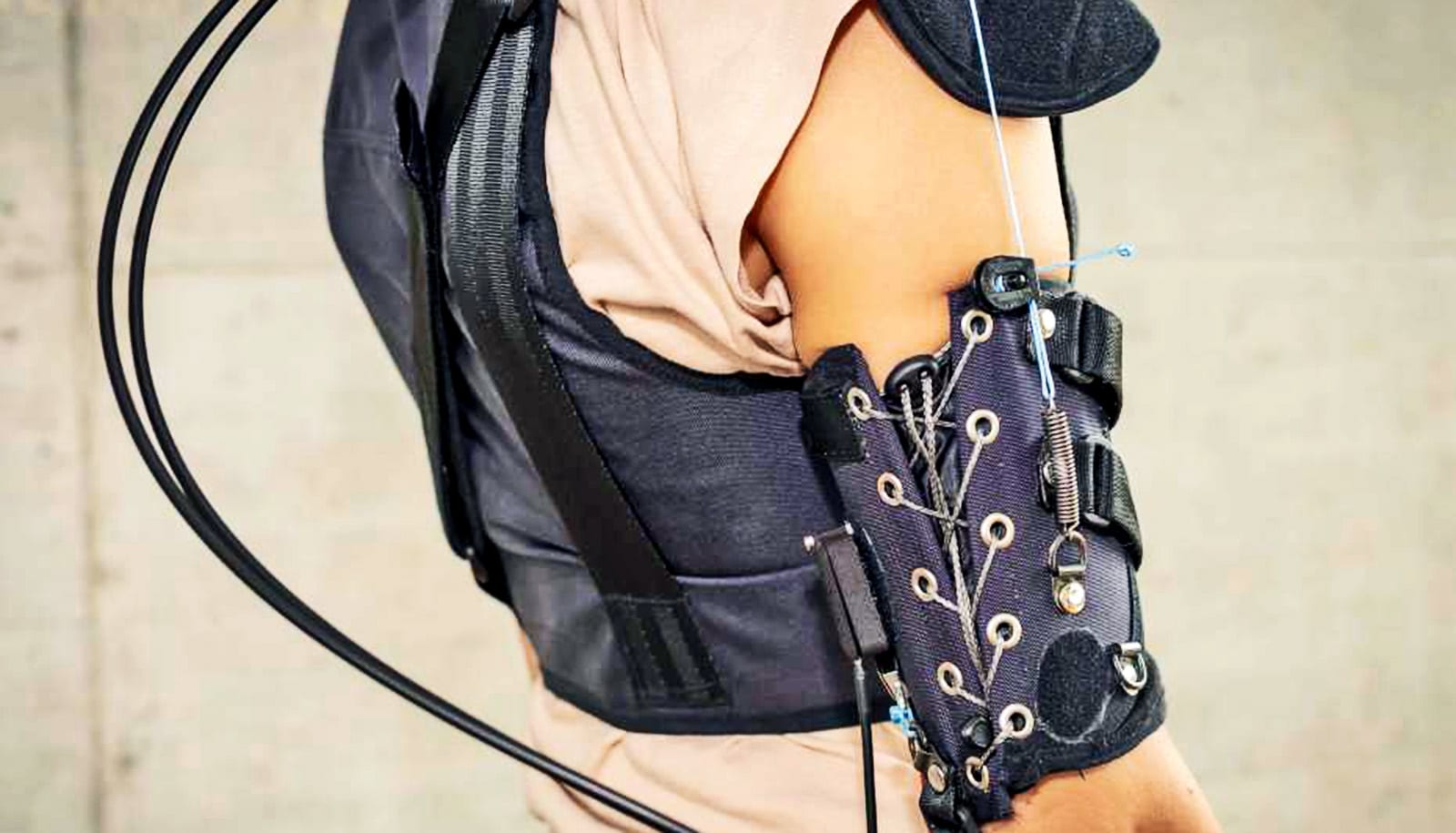 Researchers have developed a wearable textile exomuscle that serves as an extra layer of muscles.

They aim to use it to increase upper body strength and endurance of people with restricted mobility.

“My arms are simply getting weaker,” says Michael Hagmann, who was diagnosed with a rare form of muscular dystrophy known as Bethlem myopathy back in 2016. To compensate for the lack of muscle strength in his arms, Hagmann adjusts his movements in a way that results in poor posture and strain.

Marie Georgarakis, a former doctoral student at ETH Zurich’s Sensory Motor Systems Lab, is familiar with the problem. “Although hospitals have numerous good therapy devices, they are often very expensive and unwieldy. And there are few technical aids that patients can use directly in their everyday lives and draw on for assistance in performing exercises at home. We want to close this gap,” she says.

This idea led to the creation of the Myoshirt: a soft, wearable exomuscle for the upper body. It is a kind of vest with cuffs for the upper arms accompanied by a small box containing all the technology that is not used directly on the body.

Working via sensors embedded in the fabric, a smart algorithm detects the wearer’s intentional movements and the amount of force required. A motor then shortens a cable in the fabric running parallel to the wearer’s muscles—a sort of artificial tendon—and in this way supports the desired movement. This assistance is always in tune with the user’s movements and can be tailored to their individual preferences. The user is always in control and can override the device at any time.

The researchers recently tested the prototype for the first time in a study featuring 12 participants: 10 people without any physical impairments, one person with muscular dystrophy (Michael Hagmann), and one person with a spinal cord injury.

The results were promising: all participants were able to lift their arms and/or objects for much longer thanks to the exomuscle. Endurance increased by about a third in the healthy subjects and by roughly 60% in the participant with muscular dystrophy, while the participant with a spinal cord injury was even able to perform the exercises three times as long.

Nevertheless, it takes time for a product to be market-ready: “In the next phase, we want to test our prototype outside the lab in the natural environment of future wearers and use the results to further improve it,” says Michele Xiloyannis, who also works at the Sensory Motor Systems Lab at ETH Zurich and is conducting research for the Myoshirt project.

To enable the device to be worn unobtrusively and comfortably under a person’s clothing, it has to be reduced even more in size and weight—the actuator and control box currently weigh 4 kg (8.8 pounds).

The researchers want to minimize the product’s size by focusing on a single core function—supporting the user’s shoulders when lifting their arms. They are also working closely with ETH spin-off MyoSwiss AG, which manufactures and markets a soft exoskeleton—a kind of robotic suit.

“What I particularly like is how the researchers are iteratively developing their ideas in collaboration with potential users,” says Hagmann, who has already assisted with the testing of various technical aids at ETH—from prototype through to finished product. One thing is clear: he wants to continue to be active in the future and is aware that supportive technologies are exactly what he will need to accomplish this.